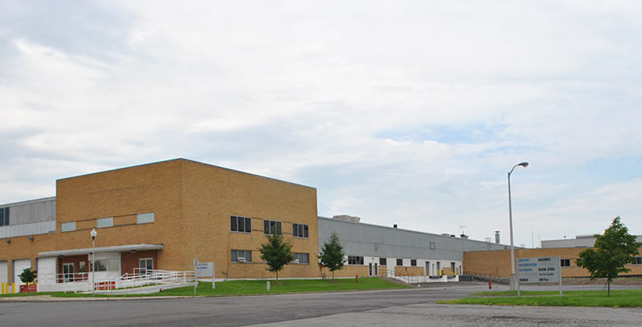 On any given workday, 500 people travel to the former GM plant in Syracuse to start their day. But they’re not making automotive parts. Instead, these individuals are employed by 15 businesses now leasing space in the 827,000-square-foot plant, now repurposed into the Salina Industrial Powerpark.

The RACER Trust is selling the Industrial Park. For details about the property, click here.

“The mission of the RACER Trust, which owns the Salina Industrial Powerpark, is to revitalize America’s auto communities by bringing new jobs and economic opportunity,” said Elliott P. Laws, the court-appointed trustee of the RACER Trust. “This is the model we are using — the transformation of a shuttered automotive manufacturing plant into a hub of economic activity and jobs — at all former GM plants and properties across the country.”

The Salina property was a natural for redevelopment. Located near major thoroughfares and a major rail line, one can drive from the Salina Industrial Powerpark to Boston, New York, Toronto, Philadelphia or Montreal in less than five hours. The Syracuse Hancock International Airport is just 2.5 miles away. You can see property information on the Salina Industrial Powerpark here.

When opening the new industrial park in 2000, former Gov. George Pataki said, “For the first time in a decade, Central New York’s economy is not only keeping pace, but growing at a faster rate, than the average in the rest of the country. Salina Industrial Powerpark is a sign of the new economic times in Upstate New York.”

General Motors began operations at the site in 1952. The site was used for the manufacture of metal automotive components and plastic auto parts. GM closed the plant in 1993.