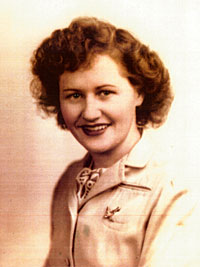 The real World War II icon "Rosie the Riveter" worked at Willow Run, building B-24 "Liberator" bombers at the famous facility in the 1940s.

Rose Will Monroe worked as a riveter in the storied facility when she was asked to participate in promotional films about the war effort. Though other women were said to have been the inspiration for the character, Rose Will Monroe epitomized the "Rosie the Riveter" image and, through advertising and newsreels, came to be widely recognized as a an endearing and enduring image of American patriotism.

The factory where Rosie worked is directly adjacent to the Willow Run airport, and B-24s were rolled out off the assembly line right onto the runways for their first test flight. A hangar at the production facility was converted to a barracks for military crews brought in to fly out the new bombers as soon as they were ready.

During the Korean War, the site was again used in the war effort, with Kaiser-Fraser producing C-119 and C-123 military cargo planes. GM took over the facility from Kaiser-Fraser in 1953 and began producing automatic transmissions at the site, after a fire at GM's "Hydra-Matic" plant in Livonia, Mich., required the company to move those operations.

To view a historic video of production of the B-24 at Willow Run, click here:http://www.youtube.com/watch?v=SYAEBIywGtg

To read more on the history of the Willow Run facility, visit: http://apps.detnews.com/apps/history/index.php?id=73&category=locations